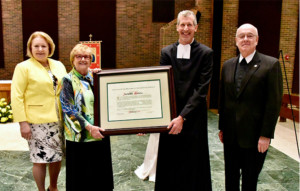 Dr. Jeanette Mines, academic associate to the provost at Lewis University in Romeoville, Illinois, received Letters of Affiliation (AFSC) during a ceremony held May 5, 2018, at the St. Charles Borromeo Center at Lewis University.

Mines has served at Lewis for more than 25 years, and in 2017, she was honored by the Lasallian Region of North America as a Distinguished Lasallian Educator at the Lasallian Huether Conference in Denver, Colorado.