Letters of Affiliation Presented in SFNO 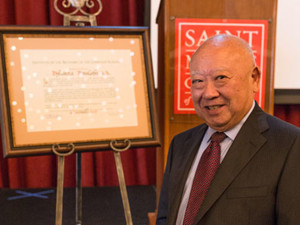 Ted Tsukahara was honored with Letters of Affiliation (AFSC) by the District of San Francisco New Orleans (SFNO) at a ceremony on April 15 at Saint Mary’s College of California in Moraga, making him an honorary member of the Institute of the Brothers of the Christian Schools.

Tsukahara first became interested in the Brothers’ mission as a ninth-grade student at Cathedral High School in Los Angeles. Tsukahara converted to Catholicism and went on to teach at Cathedral High before returning to work at his alma mater, Saint Mary’s College. Twenty years ago, he enrolled in the Buttimer Institute of Lasallian Studies and began the commitment of morning Mass with the Brothers.