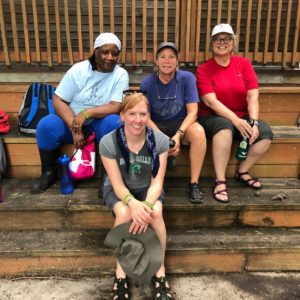 Lasallians from across the Lasallian Region of North America (RELAN) gathered in New Orleans, Louisiana for the 2019 Lasallian Social Justice Institute (LSJI), which revolved around the theme of Environmental Justice.

The June 23-28 program kicked off on Sunday night as participants gathered at Common Ground Relief (CGR), which would serve as their home during the program. CGR’s mission focuses on restoring and preserving Louisiana’s disappearing coastal wetlands. The evening featured a welcome and introduction, prayer, a social and dinner, which participants cooked together.

On Monday morning, the group walked to a tree farm and plant nursery run by CGR, which sells and donates trees to parish, state and federal agencies for large-scale wetlands restoration projects. Participants worked as a group to prepare the land for tree planting, including moving dirt, raking, cleaning and gardening. After lunch the group went to the Flooded House Museum, a recreated life-sized, post-flood “diorama,” created by the environmental non-profit Levees.org. The museum gives visitors a chance to see what many homes looked like during Hurricane Katrina. The evening featured dinner together at CGR, open circle reflection and prayer. 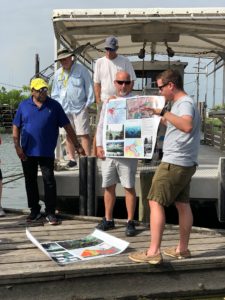 On Tuesday, participants teamed up with Natural Resources Conservation Service and traveled to Maurepas Swamp. Participants headed out on a boat in teams, dug holes and planted tree bulbs. The swamps are important both because they support plant and animal life and because they provide a buffer against tropical storms, especially when strong trees are in place that can stand up to high winds and storm surges.

Read a reflection on this experience from Robin Guy, a teacher at La Salle Academy in Philadelphia, Pennsylvania >

Wednesday was spent at Tulane University’s Center for Public Service where attendees listened to “Restore or Retreat” which was facilitated by a panel of community partners. A tour of the university followed. Afterwards, the group attended Mass at Saint Augustine Church, the oldest African American Catholic parish in the nation. The evening included free time in the historic French Quarter. 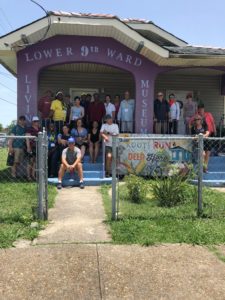 On Thursday morning, the group took an ecosystem boat tour of the marshes and bayous with local non-profit Lake Pontchartrain Basin Foundation, which  was organized by the Center for Sustainable Engagement and Development. During the afternoon, the participants headed to The Lower Ninth Ward Living Museum, which features oral histories of community members and exhibits of key events from the history of the Lower Ninth Ward. The tour of the museum was led by Leona Tate, one of the The McDonogh Three, which is a nickname for the three African-American girls, who, at the age of six, were the first black students to integrate an all-white school in New Orleans.

LSJI ended on Friday morning with time for prayer and reflection. LSJI is a program of the Office for Lasallian Education at Christian Brothers Conference. It promotes the continuing process of conversion to solidarity with persons in poverty and provides an authentic response to the Gospel and our Lasallian vocation. In previous years, LSJI has focused on urban challenges, human trafficking, immigration, gang violence, homelessness, and civil rights.