LSJI participants stand with a guest speaker from Precious Blood Ministries, an organization that works with those in the community who have been impacted by violence and conflict. Courtesy James DeHaan

Gathered in Chicago, Illinois, 19 participants and three staff members examined the theme of “Violence and Peacemaking in an Urban Setting” during the 2015 Lasallian Social Justice Institute (LSJI) July 19-24, 2015.

LSJI is a formation program for Partners and Brothers in the Region based on the Gospel and our Lasallian vocation to the promotion of social justice and service to the poor. Developed by Partners and Brothers, it is a response to the call from both grassroots Lasallians and General Chapters of the Brothers for programs that strengthen “association for educational services of the poor.”

LSJI takes on different locations and topics each year, and the goal is to hold the program in an environment where the chosen social issue can be witnessed first hand. In Chicago, where situations of violence have become more and more common, this year’s participants heard stories from law enforcement representatives, community organizers, activists, victims, perpetrators and peacemakers.

The experience provided James DeHaan, a physics teacher at De La Salle Collegiate in Warren, Michigan, with hope for social change. “Talking to the young people gave me hope for future social change,” he said. “If more dialogue can be created between the authorities, the youth and the adults of a community, real progress can be made.” 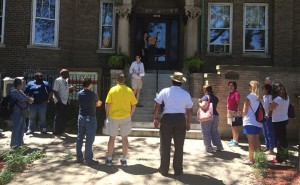 One of the goals of the 2015 LSJI was to look at the problem of violence from various aspects. Each day had a broad theme: “Painting the Picture,” “Enforcement/Prosecution” and “Prevention/Intervention.” Workshops and presentations then broke down these overarching themes into topics such as: an introduction to violence, the impact of the media, juvenile justice, conflict resolution, nonviolent language, and other relevant subjects. As in 2013, when LSJI was last held in Chicago, the Brother David Darst Center led the organization and planning of the program.

In previous years, LSJI has focused on immigration in Tucson, Arizona, and El Paso, Texas; homelessness in San Francisco, California; and civil rights in Memphis, Tennessee. In 2016, LSJI will take place for the first time in Minneapolis, Minnesota, and will focus on human trafficking. LSJI is a program of Christian Brothers Conference.