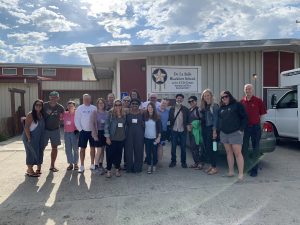 Lasallians from across the Lasallian Region of North America (RELAN) gathered at De La Salle Blackfeet School in Browning, Montana, for the 2022 Lasallian Social Justice Institute (LSJI) from June 26 through July 2. This OKI-NI-SOO-KA-WA (Come and See) Blackfeet Immersion experience focused primarily on an increased awareness of the history, challenges and current realities of Indigenous peoples, specifically those of the Blackfeet American Indian Tribe.

The program opened on Sunday, June 26 with an overview, orientation, introductions and a welcome by Brother Dale Mooney, FSC, president of De La Salle Blackfeet School. Participants discussed the pre-readings and the short film Treaty Law and Tribal Sovereignty. The evening continued with prayer led throughout the week by Jon Ficaro, De La Salle Blackfeet director of development and immersion program director, and ended with dedicated social time. 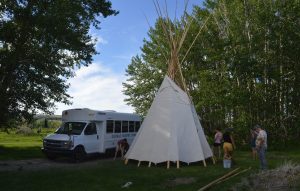 Beginning with morning prayer centered on sovereignty, Monday kicked off the with the first of many sessions throughout the immersion week. First, Leo Bird, Blackfeet Nation and Browning community member, explained indigenous ways of knowing. Bird was a science educator for over 20 years at Browning High School whose work in Bilingual education and Indian education for all has earned him the Montana Indian Education Association Teacher of the Year award. Afterwards Darnell RidesAtTheDoor and Paul Weatherwax, two fellow Blackfeet community members, discussed various traditions of the reservation that carry throughout generations. Following these sessions, participants constructed a teepee, Natoyiis in the Blackfeet Language, and had time for evening reflection.

Reflecting on the history of forced assimilation within the Church, Lila Leath, transportation coordinator of Saint Mary’s College of California in Moraga, highlighted “understanding the history of the Indian Reservation and the Catholic Church and how we can move forward.”

Tuesday’s morning prayer opened the day centered on devastation, loss and confrontation. Tribe member, 6th grade teacher at De La Salle Blackfeet School and Browning Public School System’s school board electee Rae Tall Whiteman Armstrong shared the first session about the historical trauma of Indigenous peoples as well as her own experience. Participants were introduced to the land acknowledgement project, a well-researched, thoughtful statement both naming the land to its proper owners and empowering the Indigenous peoples. Either individually or in groups, they worked on these acknowledgement projects throughout the week. The night ended with reflection, evening prayer, time together around a campfire and a Q&A with Lauren Monroe, tribal council member. 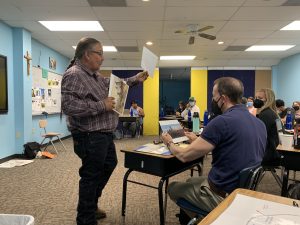 Erika Paiva, athletic director of Saint Raphael’s Academy in Pawtucket, Rhode Island, also attended LSJI in 2021, which was held on the same topic but took place virtually due to COVID-19. She noted the impact of being in person for this experience as important. “Being able to unplug, I was able to immerse myself in their everyday life,” she commented.

Wednesday began with morning prayer centered on learning, wisdom and rebirth to prepare for the day. John and Leo Bird, members and advocates of the Blackfeet American Indian Tribe, led sessions throughout the day were on survival and agency. John’s son, John Leo “LJ” Bird, a De La Salle Blackfeet School alumnus and Stanford University scholarship recipient and graduate, led the day’s final session on healing. Time was then set aside for further research and work on the land acknowledgement projects. The night ended with reflection, prayer and time for building community.

Brother Leonard Rhoades, FSC, religion teacher at Calvert Hall College High School in Baltimore, Maryland, described the week as a highlight in his formation as a Brother. In reflecting on how this experience will impact his ministry upon returning, he said, “I will take back much knowledge to include in my world religions course and Catholic Social teaching course.” 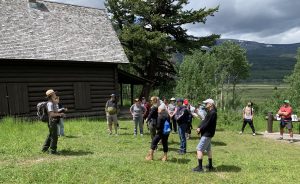 Thursday morning started with prayer and reflection before heading to a local sweat lodge. Participants and Blackfeet members took part in a traditional sweat lodge ceremony, consisting of offered prayer intentions, multiple sessions that increased in temperature and communal vulnerability, all in a pitch-black space. Afterwards, participants were led by a park ranger on a hike throughout nearby Glacier National Park. The evening allowed participants to gather, work on their land acknowledgement projects and prayerfully reflect on the day.

Friday morning prayer rounded out the program focused on sending forth, followed by the final session led by Julie Cajune, Flathead Reservation resident and Tribal member, educator, author and advocate for all Indigenous peoples. She has worked with the Indian Education for All programs in Montana, as well as De La Salle Blackfeet School teachers on developing English and Language Arts curriculum, leading several Professional Developments for our staff on next steps beyond this immersion trip. Then land acknowledgement projects from the week were shared amongst the group. This final day’s flexibility allowed participants to join in the Blackfeet powwow, a traditional ceremony of feasting, singing and dancing. Melanie Townsend, a science teacher at DeLaSalle High School in Minneapolis, Minnesota, noted of the powwow, “We saw people from each day of our week together: presenters, teepee makers, tribal leaders, kids helping with the sweat lodge ceremony, and even the park ranger that took us on a hike! If that wasn’t a nod from God blessing our week, I don’t know what else it could be!” 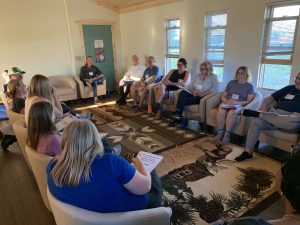 LSJI is a program of the Office for Lasallian Education at Christian Brothers Conference. It promotes the continuing process of conversion to solidarity with persons in poverty and provides an authentic response to the Gospel and our Lasallian vocation. This year’s program was supported in part by the Foundation for Adult Catechetical Teaching Aids (ACTA) with contributions towards speaker expenses. In previous years, LSJI has focused on environmental justice, urban challenges, human trafficking, immigration, gang violence, homelessness and civil rights.