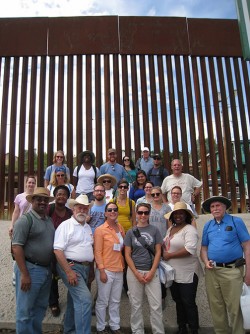 With a focus on immigration and the tough journey migrants often face, 19 participants and 3 staff members immersed themselves in the 2014 Lasallian Social Justice Institute (LSJI) from July 6 – 11. This year concentrated on the experiential program entitled El Otro Lado, Spanish for “the other side,” that is offered by San Miguel High School in Tucson, AZ.

Through first-hand experiences, participants gained a sense of the challenges surrounding illegal immigration, while also being exposed to varying perspectives. They took a tour of the U.S. Border Patrol station, hiked a migrant trail, and visited the Kino Border Initiative in Mexico where they served meals to deported migrants and heard immigration stories.

“Having the ability to interact with and learn directly from people who had been captured, jailed, and deported offered me insight into what some of the human experience is of being an illegal immigrant in the United States,” said Andrew Callery, Assistant Director of Graduate Support at De Marillac Academy in San Francisco, CA. “I hate feeling helpless in the face of human suffering; yet it is in those moments when I was unable to ‘fix’ their problems, that I was humbled and motivated to honor their vulnerability.”

LSJI is a formation program sponsored by Christian Brothers Conference that has a purpose of promoting social justice and service to the poor with a basis on the Gospel teachings and the Lasallian vocation. The program seeks to help participants draw closer to the world of the poor in order to be evangelized by them. The ACTA Foundation of Chicago helped make this year’s LSJI possible. Read more about LSJI >

Tennille Allen, Associate Professor at Lewis University in Romeoville, IL, lives and teaches in an area that has a large and fast-growing immigrant population. “This population, even in local places that are open and receptive to immigrants, often goes underserved,” said Allen. “In this way, my personal and professional interest in immigration in general and fair and humane immigration policies in particular, are part of my commitment to social justice. I have students who are immigrants. I have students who are or have family members who are undocumented and I have heard their struggles.” 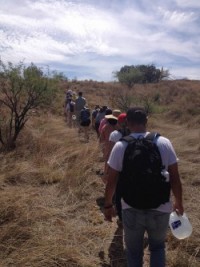 Brother James Dries, FSC, a teacher at La Salle Academy in Providence, RI, said that as a son of an immigrant, he has a particular interest in the topic. He plans to take what he’s learned in this experience at LSJI and use it to instruct in an extensive program on Lasallian Formation for La Salle Academy faculty.

“The most memorable moments [fusion_builder_container hundred_percent=”yes” overflow=”visible”][fusion_builder_row][fusion_builder_column type=”1_1″ background_position=”left top” background_color=”” border_size=”” border_color=”” border_style=”solid” spacing=”yes” background_image=”” background_repeat=”no-repeat” padding=”” margin_top=”0px” margin_bottom=”0px” class=”” id=”” animation_type=”” animation_speed=”0.3″ animation_direction=”left” hide_on_mobile=”no” center_content=”no” min_height=”none”][from the trip] were feeding the immigrants on the Mexican side who had been deported from the States. Many of them seemed to be ready to try again,” said Brother James.

LSJI embodies the Lasallian commitment to association for the educational service of the poor and the rights of children. The goal of the program is for participants to develop an understanding of the immigration issue while they reflect and share their thoughts on their responsibility to serve and act justly.

“One of the reasons so many people cross the border is to access high quality education,” said Callery. “As Lasallian educators, we have the honor of working with and supporting families who have risked so much to improve the quality of their lives. This experience motivates me (even more than before) to work and advocate for students and families who have risked so much to be here.”