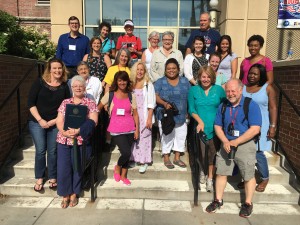 Intense moments challenged participants of the Lasallian Social Justice Institute (LSJI) as they tackled the topic of human trafficking during the July 17-22, 2016, formation program. With the theme “Human Trafficking in our Communities,” LSJI brought 23 Lasallians to Minneapolis, Minnesota, to examine the causes and effects the commercial sex industry and labor trafficking.

“The genius of LSJI is in tackling a horrific, complicated issue like human trafficking and presenting it in a way that makes it accessible for non-experts,” said participant Lois Harr, director of campus ministry and social action at Manhattan College in Riverdale, New York. “We heard from a wide variety of perspectives ranging from law enforcement to service providers and survivors. It humanized all the parties involved and what better an outcome in this ‘Year of Mercy.’”

Members of law enforcement who actively work in or lead their respective human trafficking task forces were heavily featured throughout LSJI. Participants listened to firsthand accounts from these officers about their interactions in the world of the commercial sex industry. 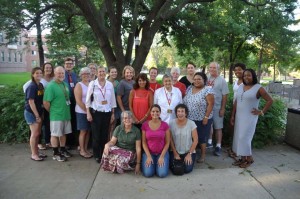 One of the day trips participants experienced was at the St. Paul Police Department. After touring the facility, the group heard from a sergeant on the task force and from Ramsey County Attorney John J. Choi, who has been a key player in Minnesota in the fight against human trafficking. The group learned about Minnesota’s Safe Harbor law, which ensures that youth (those under 18) who engage in prostitution are viewed as victims and survivors, not criminals. After Choi’s presentation, the group heard from Hayley King, a survivor of the commercial sex industry, who gave participants an emotional look into the world of human trafficking.

Participant Tom O’Connor, a teacher at La Salle High School in Pasadena, California, said what he learned at LSJI frightened him. “Coming from Southern California, trafficking is often connected to illegal immigration and the undocumented,” he said. “Sex trafficking, the greater focus of LSJI, is a much more hidden issue, and something less in the news. But the horror of it was revealed in so many of the presentations. It challenges me to educate my peers and students, and to constantly stress the social teachings on the Dignity of Human Life, to involve myself in local initiatives in Los Angeles to combat trafficking, and encourage California lawmakers to pass Safe Harbor-type legislation.”

In previous years, LSJI has focused on violence and peacemaking in Chicago; immigration in Tucson, Arizona, and El Paso, Texas; homelessness in San Francisco, California; and civil rights in Memphis, Tennessee. LSJI is a program of Christian Brothers Conference.