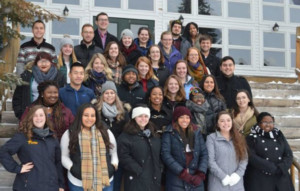 The 2017-2018 Lasallian Volunteers (LVs) gathered for the annual Midyear Retreat from January 12-15 in Brant Lake, New York. The weekend was facilitated by Maryann Donohue-Lynch, associate executive director for Mission and Ministry for the District of Eastern North America (DENA), and Chris Trinidad, campus minister at De La Salle High School in Concord, California.

The theme for the weekend, “In Winter Silence: We Listen,” contrasted nicely with the snow and chilly weather that greeted the LVs Saturday morning. Donohue-Lynch and Trinidad weaved into their time with the LVs opportunities for written reflection, creativity, dreaming of the future, sharing their vulnerability, and reflection on ways they can grow in the second half of their service year.

For second-year LV Jon Vanegas, who is serving at San Miguel School in Washington, DC, he appreciated the opportunity to take some time away from ministry and community to reflect and discern next steps as he completes his two years of service in June. “The journey to the end of a fulfilling experience is always difficult – especially when you don’t know what’s coming after. What was so lovely about this year’s Midyear Retreat is that I was able to come at peace with the idea that it is okay to not know what’s next as long as you take some silent time to let God lead you through your journey. Silence and patience are key to a rewarding discernment process.”

“At a time when I was feeling lost, Midyear was the weekend of discernment that I needed to help put me back on track,” said Madison Caropino, first-year LV serving at John XXIII Educational Center in Racine, Wisconsin.

This year’s cohort of 34 Lasallian Volunteers will gather one more time as a group for the LV Debriefing Retreat at the end of May.