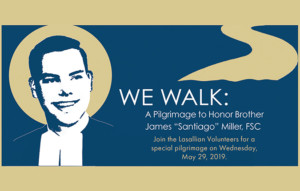 In honor of the anticipated beatification of Brother James Miller, FSC, Lasallian Volunteers (LV), in collaboration with the Midwest District, will host a pilgrimage to honor the life and legacy of Brother James, a native of Wisconsin who died as a martyr on February 13, 1982, in Huehuetenango, Guatemala.

In November, the Vatican announced that Pope Francis approved a decree recognizing that Brother James died as a martyr, an important step in his cause for beatification. The process to declare him a martyr began in 2009. Brother James was repairing a school wall when he was approached by three men, who shot and killed him.

LVs will take part in the pilgrimage May 27 – June 1, 2019, to more deeply learn about Brother James and his childhood by visiting the high school he attended, his home parish, his family’s property and his current burial place. Anyone interested in joining the LVs is welcome to participate in a special one-day pilgrimage on Wednesday, May 29 from Stevens Point, Wisconsin, where Brother James was born, to Polonia, Wisconsin, where Brother James is buried. This event is free to attend. Registration will begin in mid-March.

For more information on the pilgrimage, contact Lasallian Volunteers at 202-529-0047.