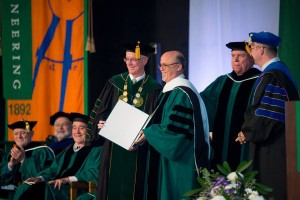 In presenting the degree, Dr. Brennan O’Donnell, president of Manhattan College, said, “Today Manhattan College is honored and privileged to recognize Brother Robert Schieler, FSC, distinguished educator, scholar, missionary and Superior General of the Institute of the Brothers of the Christian Schools. Brother Robert, through your devotion to the Lasallian mission and your passion for education, you embody the virtues and values of our founder, Saint John Baptist de La Salle.”

During his speech, Brother Robert remarked, “At this wonderful Catholic and Lasallian institution, you have witnessed that dignity is inherent to human nature. All of you and everyone else are created in the image and likeness of God. Imagine – your best friend and your worst enemy share a common dignity. We expect you to respect this inherent dignity of all persons, and this respect includes those with whom you vehemently disagree. If you truly want to be happy, and be at peace, and enjoy harmony, you must be able to disagree, discuss and argue in a civil and courteous manner.”