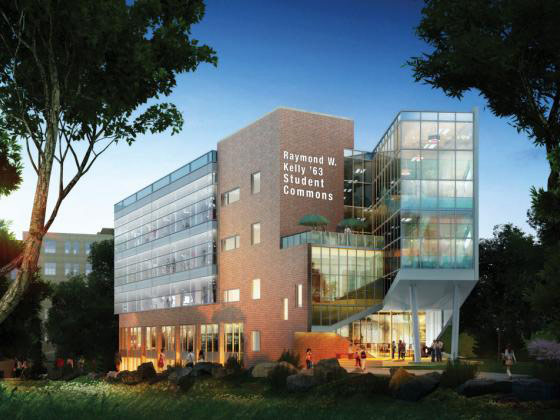 Manhattan College in Riverdale, NY, has received the largest financial gift in its history. Thomas D. O’Malley ’63, former chairman of the board of trustees, donated $10 million for the construction of Manhattan’s newRaymond W. Kelly ’63 Student Commons, honoring the New York City police commissioner.

The state-of-the-art student commons, which is expected to break ground at the end of the year, will be five floors of approximately 67,000 square feet and LEED certified. It will feature a wireless-equipped student lounge, wellness/fitness center, bookstore, dining, space for student clubs and organizations, meeting rooms, and more.

“My classmate Tom O’Malley’s generous contribution of time and personal wealth to our alma mater is in the finest traditions of the College and its patron saint, John Baptist de La Salle,” said Police Commissioner Raymond W. Kelly. “I am honored beyond measure to have the new student center named after me, which I recognize as a tribute also to the life-saving work of the entire New York City Police Department, and to the many outstanding Manhattan alumni who have served in its ranks.”

O’Malley has served as chairman of Manhattan’s board of trustees for the past seven years until this past July, and was also a trustee from 1987-2002. In 2002, the College renamed the renovated library the Mary Alice and Tom O’Malley Library to honor their dedication to Manhattan.

The donation brings the total raised for the commons to $29 million of the approximately $48 million cost.