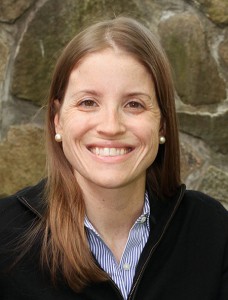 Margaret “Maggie” Naughton will join the staff of the Lasallian Volunteers as associate director effective June 14, 2016.

Naughton currently serves as a campus minister at La Salle Academy in Providence, Rhode Island. Prior to taking on that role in 2009, she had served as a theology teacher since joining the school in 2005. During her time La Salle Academy, she has also served as a Lasallian formation leader and varsity lacrosse head coach.

“I have big shoes to fill as the next associate director of Lasallian Volunteers,” said Naughton. “I humbly ask God’s Providence to guide me on this next part of my Lasallian journey. I am so grateful for my years at La Salle Academy in Providence and the wonderful mentors and friends I have journeyed with during my time as a campus minister, a teacher and coach.”

In addition to her service at La Salle Academy, Naughton brings a depth of Lasallian experience. She graduated from the Buttimer Institute of Lasallian Studies in 2014, and attended the Young Lasallians VEGA Assembly in 2010. She also presented at the 2014 Huether Lasallian Conference and the Lasallian Volunteers Orientation gatherings in 2014 and 2015.

She has been involved in a number of Lasallian gatherings in the District of Eastern North America, from being a participant to serving on the planning team as a co-chair. Her experience includes Young Lasallian District Formation, the Brother Luke Salm Religious Educators Workshop, DENA VEGA and Young Lasallians Steering Committee.

“Maggie comes to us with a strong background in Lasallian formation, pastoral care and passion for the Lasallian Volunteers,” said Kathleen Glackin, director of Lasallian Volunteers. “Her role as associate director will be marked with zeal and joy for the mission and those entrusted to her care.”

Naughton received her bachelor’s degree in sociology in 2003 from Assumption College in Worcester, Massachusetts, and her master’s in theology in 2007 from Providence College in Providence.

Naughton will work with outgoing associate director Brother Dylan Perry prior to his departure June 30. Brother Dylan is leaving the role to continue his postulancy in the Midwest District, his home District.