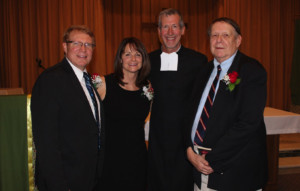 The Midwest District affiliated three longtime Lasallians to the Institute of the Brothers of the Christian Schools. The District affiliated Robert and Lori Dressel and Robert Daraskevich in a prayer service and ceremony that took place on September 7, 2017, on the campus of Lewis University in Romeoville, Illinois.

Robert and Lori Dressel have served at La Salle Manor Retreat Center in Plano, Illinois, for more than 25 years, with Rob serving as president. Both Rob and Lori are active in a number of other Lasallian initiatives. Daraskevich volunteers at the communities at Resurrection Life Center and St. Paul’s House, both skilled care facilities which serve several retired Brothers. Prior to this, he lived in the San Miguel Community in Chicago to assist the Brothers and serve at the school.

Read more from the Midwest District >