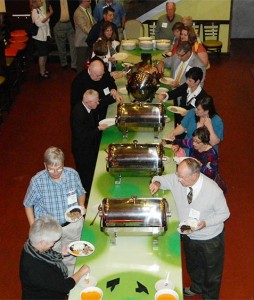 Brothers and lay Lasallians gathered in Minneapolis, MN, for the first ever Lasallian Day Twin Cities on October 10, 2013. Lasallian Day, sponsored by the Midwest District, is an effort to reflect the theme Together by Association, by gathering, sharing a meal, and spending time talking about things happening in the ministries with others in the Lasallian family, no matter what type of affiliation.

A total of about 60 people united with different types of connections such as alumni, Lasallian colleagues, Brothers, former Brothers, AFSCs, and friends, along with leaders from six different local ministries. Visitor of the Midwest District, Brother Larry Schatz, spoke before the pig roast lunch. He welcomed the guests, describing the event as a family reunion; a tradition that he hopes will be even bigger and better next year.

This gathering is the first of several that the Midwest District plans to have in the future. The District is planning to host several Lasallian Days in various cities, hopeful that it will evolve into a larger, long-lasting event that offers a way to connect with people around the country who are associated with the Lasallian mission.

Lasallian Day Memphis will be held in Memphis, TN, on October 30, 2013, in conjunction with the affiliation ceremony of three individuals who are being welcomed as new members of the Institute. Look for more information coming soon on the District website.