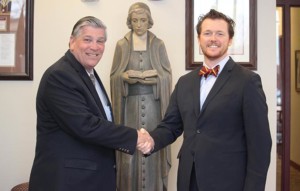 Montini Catholic High School in Lombard, Illinois, has announced the appointment of Kevin Beirne as the school’s new principal effective at the beginning of the 2018-2019 school year.

Beirne joined Montini in 2008 as an English instructor. From there, he was promoted to the director of Digital Learning Initiative and was instrumental in rolling out the school’s 1-to-1 iPad program in 2014. In 2015, he became assistant principal for student services.

Beirne is replacing Maryann O’Neill, who announced her retirement earlier this year after 32 years at Montini, 14 of which she served as principal.