The District of Eastern North America (DENA) and the Midwest District have collectively named five affiliated members of the Institute of the Brothers of the Christian Schools. This honor recognizes a lifelong commitment to the mission by a lay person. 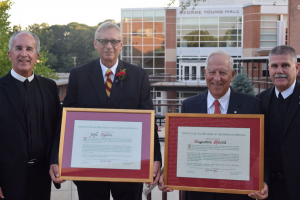 In DENA, at Calvert Hall College High School in Baltimore, Maryland, Augustine Miceli, Sr. and John Thaler were formally acknowledged at a ceremony on September 19, 2015. The Visitor of DENA, Brother Dennis Malloy, FSC, presented the letters of affiliation.

Miceli is in his 55th year at Calvert Hall as a mathematics teacher. Thaler taught at the school for 46 years, also in the mathematics department.

Calvert Hall President, Brother John Kane, FSC, commented, “The Christian Brothers have long worked side by side with lay colleagues who share the passion for the mission of Lasallian education. At Calvert Hall, we are extremely proud of our excellent and dedicated faculty. Augie Miceli and John Thaler are wonderful models of Lasallian education and have combined for 100 years of educating young men here at The Hall. We are proud and it is with great joy we now call them, ‘Brother Augie’ and ‘Brother John.'” 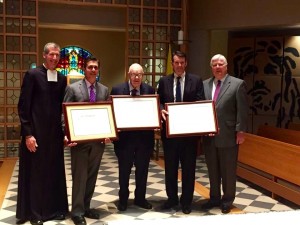 Bommarito, a 1983 alumnus, has served on the board of directors at CBCHS and is in his 11th year of running the CBCHS Alumni Open, which has raised more the $3 million dollars for the school’s financial aid program. In August 2015, the campus at CBCHS was named after Bommarito family.

Ross, a 1959 alumnus, is an active member of the CBCHS community, and through a generous donation, made it possible for the remodeling of Ross Hall, the lunchroom named in honor of his father, Mr. Dillon J. Ross.