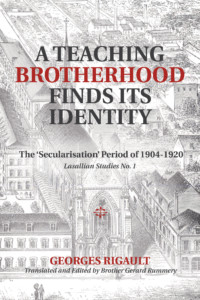 A new book offers a personal look at the De La Salle Christian Brothers’ experiences in France in the early 1900s and shows how their courageous responses to secularization kept the mission alive during this challenging period. In A Teaching Brotherhood Finds Its Identity: The ‘Secularisation’ Period of 1904-1920, Brother Gerard Rummery, FSC, offers this English translation of the original Georges Rigault book (1953).

In the book, Rigault shares individual stories of Brothers who were confronted by a challenge that threatened their life choices. It tells the stories of the 4000 or so Brothers who took the mission abroad after being exiled – either by choice or direction – rather than give up their religious habit and community life; and the stories of those who secularized in order to keep the schools open and the mission alive in France – and were often reviled for leaving religious life. The decision to leave religious life and serve in a school was especially difficult because in 1905 Pope Pius X advised the Superior General, Brother Gabriel-Marie, that maintaining religious life should be a higher priority than maintaining the schools. The book shows that the Brothers who secularized and then remained in the schools ensured the survival of the mission in France.

Brother Gerard considers that this crucial moment in the Institute’s history planted the seeds of a new awareness of the lay ministry of the Brothers and indeed, of the Lasallian vocation and ministry. “What began for me as a service to our Brothers whose main language is English eventually became for me a labor of love and admiration as a tribute to Brothers whom I never knew,” wrote Brother Gerard about undertaking this translation project.

The paperback book retails for $25 and is available through Barnes and Noble, Amazon and Lulu. Lulu also offers an e-book version for $9.