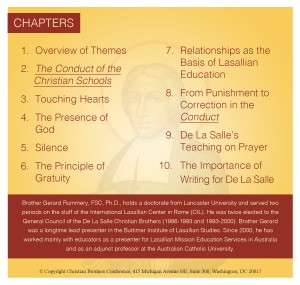 A new DVD is now available featuring Brother Gerard Rummery, FSC. In Key Lasallian Themes, Brother Gerard discusses several Lasallian values. These themes include an overview of The Conduct of Christian Schools, relationships as the basis of Lasallian education, De La Salle’s teaching on prayer, and much more. Brother Gerard served two periods on the staff of the International Lasallian Center in Rome (CIL) and he was twice elected to the General Council of the De La Salle Christian Brothers (1986-1993 and 1993-2000). Since 2000, he has worked mainly with educators as a presenter for Lasallian Mission Education Services in Australia and as an adjunct professor at the Australian Catholic University.