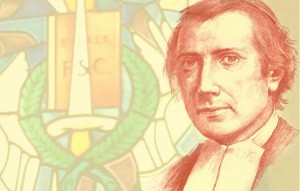 New information is now available on the canonization of Blessed Brother Solomon Le Clercq, FSC. The canonization will take place October 16, 2016, in St. Peter’s Square in Rome at 10:00 a.m. local time, and it will be televised worldwide. Two other ceremonies will also honor the new saint: a preparatory ceremony on October 15 at the Church of San Luigi dei Francesi, and a Te Deum and a Mass of thanksgiving celebrated by His Excellency Cardinal Pietro Parolin, Secretary of State of the Vatican, on October 17 at the De La Salle Shrine in the Generalate.

“The canonization of Brother Solomon will certainly be a blessing for our Institute,” Brother Superior Robert Schieler, FSC, wrote in a July 19 letter to Brothers and all Lasallians. “Together, let us thank the Lord. The example set by our Brother must push us to follow Christ day after day. Although we are not called to give a bloody witness we are called anyway to do this in the ‘terrible day to day task’ of our apostolic life.”

Brother Solomon was martyred on September 2, 1792, during the French Revolution. He was the first Brother of the Christian Schools to be martyred, and the first to be beatified. Soon after his death, three more Brothers were martyred; they are recognized as the Blessed Martyrs of Rochefort. September 2 marks the feast day of both these Brothers and Blessed Brother Solomon.

Four others will be canonized with Brother Solomon: Manuel González García, a Bishop of Spain, Lodovico Pavoni, an Italian priest, Alfonso Maria Fusco, priest and founder of the Sisters of St. John the Baptist, and Elizabeth of the Trinity, a French Carmelite nun.

The July 2016 issue of Intercom, a publication of the Institute of the Brothers of the Christian Schools, tells the story of Brother Solomon using youth-friendly illustrations on pages 9-12.