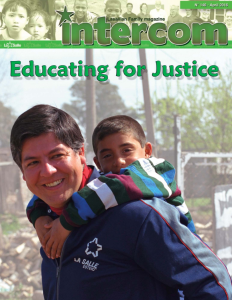 The Institute has released the latest version of Intercom, focused on “Educating for Justice,” which features examples from the Lasallian Region of North America (RELAN).

In sharing news from the Regions, the magazine highlights ministries in RELAN, including Martin De Porres School in the District of Eastern North America, San Miguel School, Chicago in the Midwest District, and De Marillac Academy in the District of San Francisco New Orleans.

Intercom also highlights the Lasallian Social Justice Institute (LSJI), a Regional formation program. Registration is currently open until May 13 for LSJI 2016, which will be held July 17-22 in Minneapolis with a focus on human trafficking.