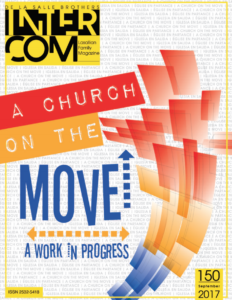 The new issue of Intercom, “A Church on the Move,” is now available. This issue invites us to go beyond our borders to build bridges of mutual understanding and tells the story of how Lasallians are already achieving this goal.

Two ministries from the Lasallian Region of North America are included in this issue. “Creating a Campus of Inclusion,” which originally appeared in the spring 2017 issue of De La Salle Today, features Saint Mary’s College of California in Moraga, and tells the story of a Muslim student finding her place on campus. “Leave to Serve: The School’s Privileged Role in Evangelizing the Young Through Service and Reflection,” shares how students at La Salle College High School in Wyndmoor, Pennsylvania, are learning that part of what it means to be Lasallian is serving others.

The Institute of the Brothers of the Christian Schools publishes Intercom for the Lasallian family.