Brother Superior General Robert Schieler, FSC, recently sat down with Salt and Light TV for an extended interview covering a wide range of topics. The interview took place in light of Brother Robert’s participation in the October 2018 Synod of Bishops, which he discussed. He also talked about works in the worldwide Lasallian mission, including Bethlehem University and Ethiopian Catholic University. 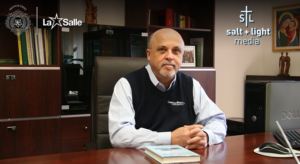 Courtesy Institute of the Brothers of the Christian Schools Communications Service

“What we try to do in our own formation with our teachers around the world is give them a language to articulate what they’ve always felt, that teaching was not just a profession, it was a vocation, but they didn’t always know how to speak about it in terms of vocation,” he said. “So, through understanding St. La Salle’s vision and what he was trying to do, they feel, ‘yes, this is my vocation, it’s more than just a profession.’”

In explaining the vocation of a De La Salle Christian Brother, Brother Robert referred to Saint John Baptist de La Salle’s mission and how the first Brothers were not intended to be priests, but instead to focus on education.

“La Salle said to this group of laymen — poorly educated laymen — in 17th century France, this is a ministry. It’s not a job. You’re in a ministry where you have to touch hearts, and that’s the greatest miracle you can perform. But it requires your undivided attention, and that kind of a spirit has been with us ever since. [I’m] quite proud to be a Brother. To spend your life working with young people, I can’t imagine anything greater.”