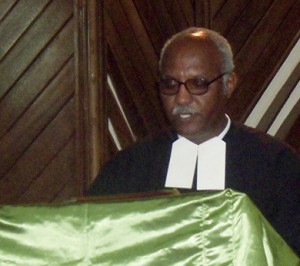 Brother Ghebreyesus Habte, FSC, at the Mass and celebration in his honor held July 1

Brother Ghebreyesus Habte, FSC, is the new Visitor of the Lwanga District in Africa, the District that partners with the Lasallian Region of North America (RELAN) through the twinning program. Bro. Ghebreyesus assumed the role on July 1, 2014, following Brother Esayas Tsegai, FSC, who served as Visitor for eight-and-a-half years.

Bro. Ghebreyesus most recently served for three years as principal of Hagaz Agro Technical School in Eritrea. Since 1980, he has held various administrative and teaching roles in schools. He also served as Auxiliary Visitor, Sector Coordinator, and Director of the Institute of Religious Studies in Eritrea from 1997 – 2009.

Bro. Ghebreyesus grew up in the village of Shinara, near Keren, in Eritrea. As a boy, he was a goat shepherd until joining the Juniorate program in grade six. He became a De La Salle Christian Brother in 1977. His hopes for his District include working closely with and supporting Brothers and Lasallian Associates to carry the mission with selfless dedication and courage, to continue the work done by his predecessors to achieve self sufficiency, and to be aware of those who are the most in need.

Members of the District of Eastern North America (DENA) Twinning Summit were in Kenya on July 1 for the Mass and celebration honoring the new Visitor. Bro. Ghebreyesus hopes to strengthen the twinning relationship between Lwanga and RELAN, and enhance communication and information sharing.

Brothers Ghebreyesus and Esayas are working together on the transition. Bro. Esayas will serve as principal of Hagaz Agro Technical School in Eritrea and assist in the construction project of the De La Salle School Nairobi.