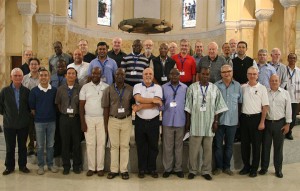 The newly appointed Visitors with members of the General Council. Courtesy Brother Anatole Diretenadji, FSC, Delegate of the Superior General to Rwanda, Lasallian Region of Africa

Three Brothers from the Lasallian Region of North America (RELAN) are back in their Districts after participating in a 10-day session for new Visitors at the Generalate in Rome. Auxiliary Visitors Brother Edward Phelan, FSC, from the District of Eastern North America, and Brother Bede Baldry, FSC, and Brother Michael Kadow, FSC, both from the Midwest District, were among the 23 Visitors, Auxiliary Visitors and Delegates with fewer than 18 months in the position who took part in the gathering.

Brother Michael described his time in Rome as empowering. “It was a wonderful experience of brotherhood and learning! It was particularly gratifying to interact with Brothers from around the world who are entering leadership within their respective Districts and Delegations,” he said. “I was particularly impressed with our General Council and all of those ministering in the various Secretariats and offices within the Generalate. They are truly working collaboratively to further the Lasallian mission. I returned to the Midwest encouraged and energized for the tasks that lie ahead!”

One highlight for Brother Edward was meeting men from all over the world and learning about their lives from before they became Brothers. He also appreciated the focus on the future. “The General Council and Brother Robert shared with us their Institute-wide plan for the next six years,” he said. “While we know that plan well from Circular 470, listening to them explain the details was a very moving experience.”

The Superior General thanked the Visitors for their willingness and commitment as leaders to serve their Brothers and the Institute. Brother Robert ensured his own continued prayers, and those of the Brothers of the General Council, and reminded the Visitors of the availability of help and support as they carry out their work.