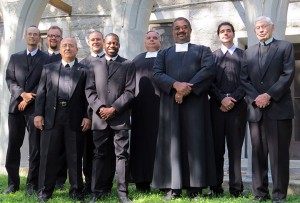 Jeremy House in Philadelphia, PA, is a place where young men come to discern their vocation to the life of a Brother. It is known as the Postulancy residence and is the first stage of Initial Formation on the path to becoming a De La Salle Christian Brother. Currently five young men among eight postulants from around the Region are living in community at Jeremy House, participating in a program with several components that enable them to experience the life of a Brother and see if it is what God might be calling them to do with their lives, said Brother Richard Buccina, Regional Postulancy Director.

The five postulants include Jerry Brocky, Johnathon Emanuelson, Ryan Anderson, and Michael Phipps, all from the Midwest District, and Joseph Wright from the San Francisco District.

“The Postulancy is a very important step for these young men in their journey of discernment,” said Bro. Richard. “It gives them the real-life opportunity to test themselves in the key elements of the Brothers’ life: our life of prayer, our professional life of education and child care, and our life of fraternal community.”

The Jeremy House program typically runs from late August until early June, the length of an academic year, and is made up of several different parts, including learning to live in religious community, learning about the Founder and the charism of the De La Salle Christian Brothers, preparing themselves for the teaching profession, and deepening their spiritual lives through both communal and personal prayer.

“I’m really looking forward to having time to reflect on my life, my faith journey, my journey as a Lasallian, and to really take in a wider body of knowledge about the Lasallian world, particularly about the life of the Brother and the intricacies of that life,” said Phipps, who is a Lasallian Volunteer alum, currently serving as a counselor for students at West Catholic Preparatory High School. He is also taking theology classes at La Salle University.

The Postulancy stage can vary in length, but is generally two years. After the completion of this period, the candidates may be recommended for the next stage of Initial Formation known as the Novitiate in Napa, CA.

“The Lasallian charism is very much alive and well, and I think that’s why I’m so drawn to it, why I feel so called to be a Brother,” said Phipps. “It’s not something that’s going away.”