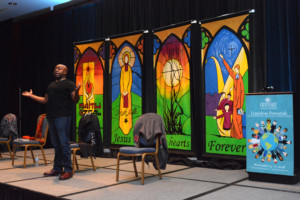 Dr. Michael “Mykee” Fowlin, psychologist, performer and poet, received a standing ovation following his address that mixed humor and serious messaging to encourage attendees to use their own painful experiences to help others heal. He shared the idea of the limitless potential that exists when we get to know people for who they really are.

“I think that Mykee weaved stories through using different characters in a way that at first made you uncertain what personas were his when we was naming something from other people, and, as you journeyed with him, you had a sense of curiosity that kept your attention,” said Keith Donovan, executive director of the Brother David Darst Center in Chicago, Illinois. “He also wove through an emotional roller coaster in which you both were able to connect with and feel some level of distance from the characters in a way that really touched your heart and made you think carefully about the way in which you personally step through the world and the way in which others perceive how you step through the world.”

Tim Ogburn, a longtime teacher who is serving in his first year as a teacher at De Marillac Academy in San Francisco, California, could relate to some of the personal experiences Fowlin shared. He thought Fowlin’s humor and delivery helped break down borders around sensitive topics, and he hopes to bring some of Fowlin’s tactics back to his classroom.

“Building trust with my students has been a big challenge for me,” said Ogburn. “Thinking about how I can apply that idea of learning to see them and let them know that I see them. I think he really gave a lot of ideas on how I can do that.” 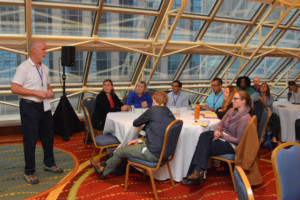 In addition to the keynote, Huether participants attended three rounds of breakout sessions, which included topics such as connecting with Lasallians in other Regions, partnering with Districts outside of the Lasallian Region of North America for service opportunities, understanding and addressing poverty, building community within ministries, environmental sustainability, and more. Attendees also gathered for District meetings and dinners. Each session, break time and gathering offered opportunities for new perspectives, reflection, professional growth, and building community.

“I actually texted my administrators and said, ‘Thank you for giving me this opportunity to come and rejuvenate the spirit. I am infused in the mission, in my work,’” shared Larson.

On Saturday, Huether will turn its focus to the Year of Lasallian Vocations, which will be celebrated during the 2018-2019 liturgical year to mark the 300th anniversary of Saint John Baptist de La Salle’s entry into eternal life and celebrate the impact of the mission he started. Saturday also kicks off the Lasallian Jubilee Year, which the Holy See declared in honor of the anniversary. Brother Timothy Coldwell, FSC, General Councilor for the Lasallian Region of North America, and a panel of educators will invite participants to reflect on their vocational callings in light of this anniversary year.

The conference began Thursday with a social for first time attendees and a keynote address by Peter Stemp and Brother Téfio Raoul Traoré, FSC, both associate directors of De La Salle Solidarietà Internazionale – ONLUS, that encouraged attendees to bring the global Lasallian family to their students and invite them into deeper participation in the mission.

Huether, hosted by the Office for Lasallian Education at Christian Brothers Conference in Washington, D.C., is taking place at the Minneapolis Marriott City Center November 15-17, 2018. This year marks the conference’s return to Minneapolis, which is where the first gathering was held in 1973. Follow the highlights here and by using using #Huether2018 on Facebook and Twitter.