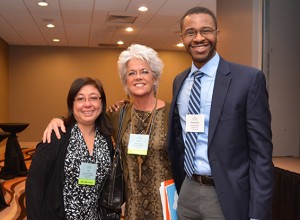 Even before the opening of the 43rd annual Huether Lasallian Conference in Chicago, nearly 60 advancement professionals from 27 Lasallian ministries gathered for a pre-conference session that covered a broad range of topics.

Thursday’s eight breakout sessions were divided into four parts, with topics including the basics about fundraising, steps to having a successful annual campaign, phonathons, planned giving and more.

“They’ve been very informative. I like to hear the stories,” said Danielle Lavie, development director at Saint Paul’s School in Covington, Louisiana. “It’s good when we can exchange ideas with other schools across the country to see what they do and how to raise money.”

“There’s always some little thing about ‘the ask’ or just a little personal thing that you write down and it clicks with someone,” Michael Sawicki, president of La Salle Retreat Center in Glencoe, Missouri, plans to put into practice tips he learned at various breakout sessions. “You’re going to go back and go, ‘oh I can do this with Mr. X or Mrs. Y.’” 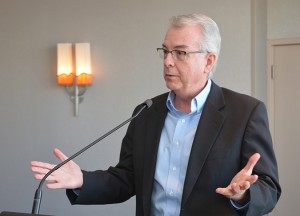 Steve Crisman, senior vice president for advancement at CBU in Memphis, Tennessee, chaired the pre-conference advancement track. The session began Wednesday evening with a networking reception sponsored by Lipman Hearne. Breakout sessions focused on advancement topics will also be woven into the three rounds of breakout sessions that will take place Friday during the full Huether Conference, which will open Thursday evening.

Huether is taking place for the third consecutive year at the Holiday Inn Chicago Mart Plaza River North. Huether, hosted by Christian Brothers Conference, is an opportunity for educators to not only learn new techniques and find inspiration, it also allows them to interact, share best practices, and grow more deeply committed to their vocation of providing students with transformative, holistic experiences.