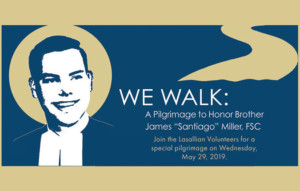 In honor of the anticipated beatification of Brother James Miller, FSC, Lasallian Volunteers (LV), in collaboration with the Midwest District, is hosting a pilgrimage to honor the life and legacy of Brother James, a native of Wisconsin who died as a martyr on February 13, 1982, in Huehuetenango, Guatemala.

In November, the Vatican announced that Pope Francis approved a decree recognizing that Brother James died as a martyr, an important step in his cause for beatification. The process to declare him a martyr began in 2009. Brother James was repairing a school wall when he was approached by three men, who shot and killed him.

For more information on the pilgrimage, contact Lasallian Volunteers at 202-529-0047.