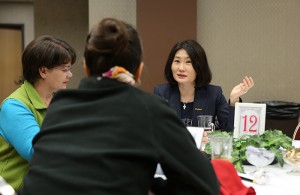 Discussions during the 2014 symposium. Courtesy Saint Mary’s University of Minnesota

The symposium will be held September 27-29, 2015, at the Saint Mary’s University of Minnesota Twin Cities Campus with Brother Robert Schieler, FSC, Superior General, as the keynote speaker.

Saint Mary’s Institute for Lasallian Studies hosts the event, which the Lasallian Region of North America (RELAN) co-sponsors. The first symposium was held in 2012 with 43 participants. By 2014, it had expanded to include more than 120 Lasallians from around the world.

Papers or presentations on the research themes developed by the International Association of Lasallian Universities (IALU) are preferred, however, others will be considered. The IALU themes include: education and learning innovations; food, nutrition and health; and environmental sustainability.