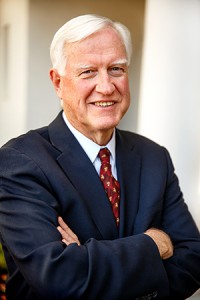 Saint Mary’s College of California in Moraga introduced Dr. James A. Donahue as its 29th president March 26. He will assume the leadership role July 1, 2013 as the first non-Christian Brother to lead the college. This announcement comes as the College celebrates its 150th anniversary.

“Saint Mary’s College holds a distinctive place in the landscape of higher education today. I have a profound respect for so many attributes of the College, and of the Lasallian approach to education — the commitment to the highest quality of education, the values, the careful student-centered nurturing and support, and the religious and spiritual formation,” Dr. Donahue said. “I am grateful to the generations of Christian Brothers who have provided inspired presidential leadership for Saint Mary’s, and I am deeply honored to be appointed as the College’s next president.”

Dr. Donahue’s selection is the result of a thorough search process that sought highly qualified Christian Brothers, religious men and women, and lay candidates. He is currently president of the Graduate Theological Union (GTU) and his son is a 2008 graduate of Saint Mary’s College High School in Berkeley, CA, which is another Lasallian school. In his role as president at the GTU, Donahue had the opportunity to work closely with faculty and administrators at Saint Mary’s College, including the Bishop John S. Cummins Institute for Catholic Thought, Culture and Action, and as an advisory board member of the Center for Engaged Religious Pluralism. Dr. Donahue brings more than 20 years of executive leadership experience at leading U.S. institutions to his role at Saint Mary’s. He has been committed to the public role of ethics and theology throughout his career.

In June 2012, President Brother Ronald Gallagher announced his decision to step down as president and return to the faculty when his current term ends June 30, 2013.