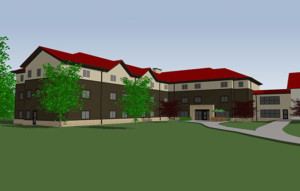 Saint Mary’s University of Minnesota (SMUMN) in Winona, will break ground on the construction of a new residence hall, which will be named in honor of Brother William Mann, FSC, who will be stepping down in May 2018 as president of the university after 10 years of service.

The funding of this building was made possible by anonymous gifts, totaling $6.9 million.

“With Brother William’s announcement of his departure, these families wanted to recognize all that he has accomplished during his tenure, and they felt that a building in his honor would be a way to have his legacy live on at Saint Mary’s,” said Audrey Kintzi, vice president for development and alumni relations.

The hall, a 112-bed, three story apartment-style residence hall for first-year students, will be completed in 2019.