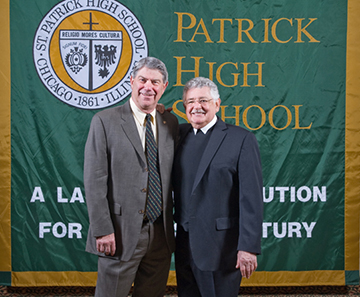 Saint Patrick High School in Chicago, IL, honored its longtime leadership team as the school prepares for transition. More than 500 guests gathered April 13 for the Honor Lasallian Leadership event that celebrated Brother Konrad Diebold, FSC and Dr. Joseph Schmidt, AFSC who have been the president-principal leadership team at St. Pat’s for the past 26 years.

Bro. Konrad, who will retire June 30, 2013, was honored for 35 years of service and dedication to students, and for strengthening the school’s mission during his tenure. He has been president since 1987 and formed the first official Board of Trustees. He oversaw many major improvements at the school, including the addition of a technology center and an arts center.

Dr. Schmidt, who has served as the first lay principal since 1987, will become the first lay president of St. Pat’s July 1, 2013. He began his teaching career there in 1967 and was recently honored by being named an affiliate of the Christian Brothers. At the April 13 event, Bro. Konrad surprised Dr. Schmidt with the Counsellor II Award, which is awarded annually to recognize an individual of exceptional dedication, generosity or service to the Lasallian educational mission as it is lived each day at St. Pat’s.