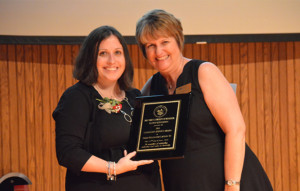 Saint Mary’s University of Minnesota (SMUMN) in Winona honored Sarah Laitinen, director of Lasallian programs for the Office for Lasallian Education at Christian Brothers Conference (CBC), with a 2018 Alumni Award. Laitinen, who graduated from SMUMN in 2007, was among four people recognized as outstanding alumni Saturday, June 23, 2018, during SMUMN’s Reunion Week.

Laitinen joined the CBC staff in August 2016. As director of Lasallian programs, she collaborates with Districts and Lasallians throughout the Region in the creation, operation and evaluation of Regional Lasallian formation/education programs.

Prior to joining CBC, Laitinen served as a teacher at The San Miguel School of Providence in Rhode Island after serving at the school for two years as a Lasallian Volunteer (LV). She also received her master’s in education from Saint Mary’s College of California.

Laitinen has taken part in a number of Lasallian initiatives at the international, Regional and District levels. She served on the International Council of Young Lasallians (2015-2018), was a delegate to the 3rd International Symposium of Young Lasallians in Rome (2014), graduated from the Buttimer Institute of Lasallian Studies (2012), and participated in the USA-Toronto Region VEGA program (2010). She has also served in various capacities for initiatives of the District of Eastern North America, such as the Young Lasallians Steering Committee and the Association for Lasallian Mission Committee, and as a delegate to the Mission Assemblies in 2011 and 2015. She is also involved in a number of local Lasallian committees and councils, and has presented at a variety of Lasallian gatherings.

More about the ceremony from SMUMN >