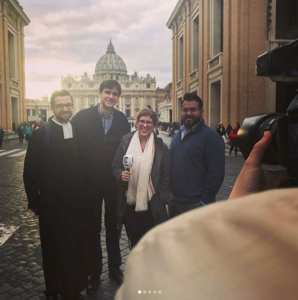 Brother Javier Hansen, FSC, from the District of San Francisco New Orleans, is one of three representatives from the United States to the Pre-Synod gathering in Rome, which began March 19 and will end on March 25. Brother Javier teaches religion at Cathedral High School in El Paso, Texas.

The Pre-Synod gathering is a preparatory step for the 2018 Ordinary Synod, Young People, the Faith, and Vocational Discernment, which is a meeting of the Synod of Bishops to be held in October 2018 at the Vatican. The gathering was conceived, according to the United States Conference of Catholic Bishops website, as “a way to listen directly to the voices of young adults around the world.”

Through one of his Instagram photos, Brother Javier shared one day of his Pre-Synod experience, “A true cosmopolitan experience. We began our work session by breaking up into language groups. English is the most popular with eight small groups. There are people in my group from England, Australia, Zimbabwe, Greece, Poland, Germany, Jordan, Egypt, Slovenia, Poland, Philippines, and Romania. We will be composing a document from all our small groups to deliver to Pope Francis on Sunday.” 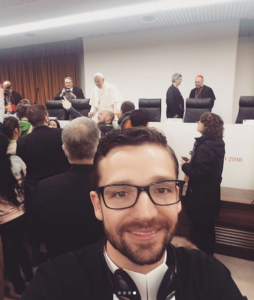 The Pre-Synod gathering has included discussion among young people from all over the world as they help to prepare and edit a document which will serve as the guide for bishops during the Synod. The final document will be presented Saturday, and given to the Pope at Palm Sunday Mass.