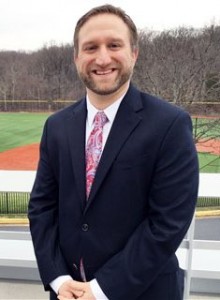 St. John’s College High School in Washington, DC, has appointed Christopher Themistos to serve as the school’s new principal at the start of the 2016-2017 academic year. Themistos will replace Brother Michael Andrejko, FSC.

“As principal, I will promote the mission and values of the Brothers of the Christian Schools and ensure that every student in our care continues to receive the countless gifts that come from a Catholic, Lasallian education,” Themistos said.

Themistos joined the St. John’s faculty in 2001, and has served as a teacher, director of admissions and academic dean. Since 2013, Themistos has served as assistant principal for academic affairs. Themistos is a graduate of the Lasallian Leadership Institute, a formation program Christian Brothers Conference previously offered, and recipient of the Lasallian Educator of the Year Award.

At the end of the 2015-2016 school year, Brother Michael announced his decision to resign as principal in June 2016 after serving in the role for six years.