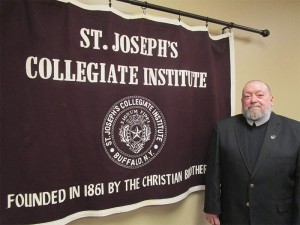 Brother Chris has been a Christian Brother since 1981 and was principal at La Salle Institute in Troy, New York, before joining the staff of St. Joe’s in September 2004. In his 11 years with the school, he has served as vice principal of student affairs, Spanish teacher, and most recently as interim principal.

“I am absolutely delighted to appoint Brother Chris the next principal of St. Joseph’s Collegiate Institute,” said Robert T. Scott, AFSC, president of the all-boys’ school. “He brings with him the dedication true to his vocation, a clear knowledge of our school and our commitment to academic excellence, and most significantly, a genuine concern for the young men who have been entrusted to our care.”

Brother Chris currently serves on the Board of Trustees for both St. Joe’s and De La Salle Collegiate in Warren, Michigan. This summer, Brother Chris completed the Buttimer Institute of Lasallian Studies, an intensive, three-year Lasallian formation program.