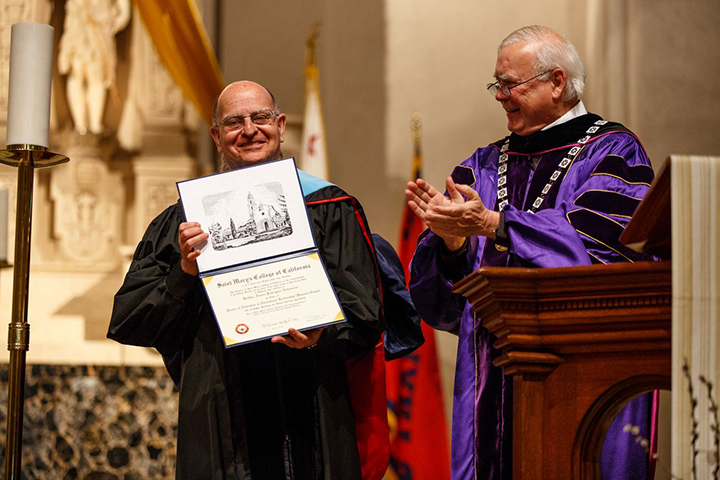 As part of the 150th anniversary celebration at Saint Mary’s College of California in Moraga and De La Salle Week, Superior General Brother Álvaro Rodríguez Echeverría inspired a crowd of more than 300 with his words on empowering the poor through globalization in education. He also received an honorary doctoral degree.

In his address, Bro. Álvaro highlighted Saint Mary’s accomplishments in research and service, and noted how the college represents the diversity of the global community. He invited the Saint Mary’s community to look forward to imagine new ways to respond to today’s problems, while not forgetting the college’s lived experience of the past 150 years. He also told students never to lose their ability to dream.

“As heirs of De La Salle, I believe that you should feel deeply the call to follow in the footsteps of our Founder by building a world where every person counts and is treated with respect and affection, where education and new technologies are at the service of justice, peace and solidarity, where we are not afraid to proclaim Jesus as our Savior, in a spirit of respect, dialogue and cooperation with other religions and a world where we know how to join forces, men and women of different cultures and religions in building a more fraternal and just world,” he said.

While on campus, Bro. Álvaro also participated in a panel discussion with Saint Mary’s Brothers and professors entitled “Brothers and Partners on the Cutting Edge: Lasallian Leadership in the 21st Century.” It featured topics including the involvement of Brothers and Partners in fighting against human trafficking and creating affordable solutions to urban education.

Pictures and video from the event >