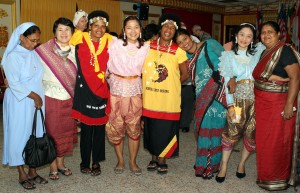 Brother Superior General Robert Schieler, FSC, has released this message in which he encourages women from across the international Lasallian family to attend the 2017 Global Women’s Symposium in Auckland, New Zealand, July 16-19, 2017.

In his letter, Brother Robert says, “I ask that you give serious consideration to participation in the Symposium; after all, women represent over fifty percent of all Lasallians and make unique contributions to our mission. Building relationships, the ability to motivate others, a willingness to change and a fundamental role in passing on religious and spiritual realities are some of the qualities you bring to our educational communities.”

The theme for the symposium is “Lasallian Women as Change Makers,” and is being hosted by The District of Australia, New Zealand, Pakistan and Papua New Guinea (ANZPPNG).