Supporting Twin Schools One Mile at a Time 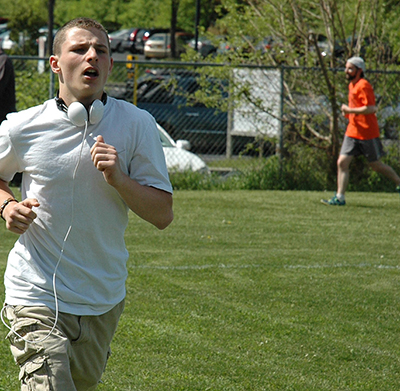 Young men at La Salle School, a residential treatment center in Albany, NY, laced up their running shoes with Lasallians in Kenya on their minds.

Campus Minister Richard Ward organized the unique fundraiser to put a Lasallian twist on the organization’s annual health and fitness day. “Walk a Mile in Their Shoes” took place during La Salle’s Founder’s Week celebrations in May and raised money for its twin school, St. Paul’s Secondary School in Marsabit, Kenya.

Even though the young men La Salle serves can’t do traditional fundraisers, Ward wanted to get them involved with helping their twin school. So, he asked others to sponsor the runners and ended up collecting about $2,500 in donations from supporters in 20 states. To help motivate the young men to run or walk, Ward talked to them about the twinning program and how it makes such a difference in the lives of students.

“One of our kids from Central America actually went door to door in his residential division motivating other kids to participate by telling them how education in his country isn’t guaranteed, and that they should support our Kenyan school,” said Ward. “And it worked! Even if some of our kids didn’t like to exercise, they were out there anyway doing a mile because the students in Kenya could use their support.”