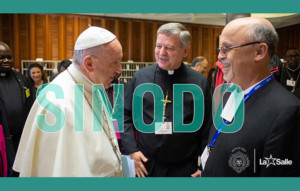 Courtesy Institute of the Brothers of the Christian Schools

Following his attendance at the 2018 Synod of Bishops focusing on “Young People, the Faith and Vocational Discernment,” Brother Superior General Robert Schieler, FSC, gave an interview on his experience. The Synod was held in Vatican City from October 3-28, 2018.

During the Synod, bishops, together with priests, men and women religious, and young people from all over the world, gathered for days of prayer, discussion, analysis and dialogue.

During the Synod, Brother Robert also spoke out in support of allowing women who take part in the Synod of Bishops to vote at the gathering.