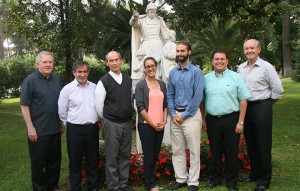 Three Lasallians from the Lasallian Region of North America (RELAN) recently returned from the inaugural meeting of the International Council of Association for the Lasallian Educational Mission (CIAMEL).

General Councilor Brother Gustavo Ramírez Barba, FSC, led the gathering, which took place October 1-6, 2015, in Rome. The council reviewed, analyzed and discussed their statutes that were prepared last February in light of the propositions in Circular 469, the strategies in Circular 470, and the outcomes and challenges of the 2013 International Mission Assembly report. At the conclusion of the meeting, participants reported the initial outcomes of their work. Those outcomes were presented in a chart format listing prioritized strategies and those responsible for implementing the strategies.

Time was also spent building community through socials and attending morning prayer and Mass with the Generalate community.