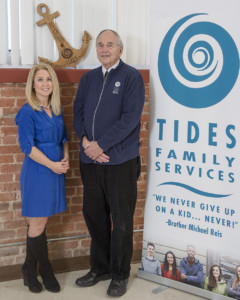 Tides Family Services in West Warwick, Rhode Island, has announced the appointments of Beth Bixby as the new chief executive officer (CEO), and Brother Michael Reis, FSC, as the chief visionary officer. Brother Michael, who founded Tides in 1983, is stepping down as CEO to take on this new role.

During her 17 years at Tides Family Services, Bixby has held various positions as clinical supervisor, director of home-based therapeutic services, assistant vice president, and senior vice president of treatment programs. Since 2015 she has served as the chief operating officer. Bixby has served on the planning committee for and presented at the Huether Lasallian Conference, a program of the Office for Lasallian Education at Christian Brothers Conference. She has received the Distinguished Lasallian Educator award. Bixby is also a member of the first graduating class of the Next Generation Lasallian Leaders.

Brother Michael founded Tides when he recognized that families benefit the most from services that are delivered in their homes, in their own environment. Since then, Brother Michael has expanded services throughout Rhode Island. Today, Tides serves more than 500 high-risk youth and families in Providence, Pawtucket, Central Falls, Woonsocket, West Warwick, and recently opened an office in Middletown serving clients statewide.

Brother Michael’s new role will allow him to focus efforts in advocacy, fundraising and as Lasallian Ministry Leader.

In 2018, Tides is celebrating its 35th anniversary year, during which the agency will host a series of special events throughout the year to celebrate this milestone, as well as the new roles for Brother Michael and Bixby.