Twinning: Solidarity in Prayer and Support

As the Lenten season gets underway, many schools in the Lasallian Region of North America (RELAN) are showing support for their twin schools in Africa’s Lwanga District. Twinning is an initiative of the Institute of the Brothers of the Christian Schools that partners Districts capable of providing funds with Districts in need as they work toward becoming self-sufficient. 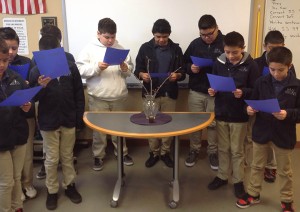 Many schools in RELAN have also launched fundraisers to support their twin schools in Africa. Lasallian Youth at The San Miguel School of Providence kicked off a campaign to benefit Nativity School. “Earning for Eritrea” collects coins and uses friendly competition between classes and creative fundraising ideas to bring in donations.

Students at La Salle Academy in Providence, RI, are hosting fundraisers throughout Lent for Rongai Agricultural and Technical Secondary School in Kenya. Fifty-five students and teachers kicked off the fundraising efforts on Ash Wednesday with a “Hunger Games” Banquet that divided participants into three groups: those who have plenty, those who have something, and those who have little or nothing. To raise awareness of hunger, they were served dinner according to their grouping ranging from a full meal at tables to little food seated on the floor. 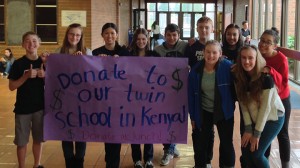 In addition to praying together, La Salle Catholic College Preparatory in Milwaukie, OR, is hosting a school-wide fundraiser during Lent where students, faculty, and staff are encouraged to give up something or do something to raise money for Mwangaza College in Kenya. The fundraiser is a competition between classes to see who can raise the most.

Students are learning more about their twin schools in Africa through new resources, and schools on both continents are being encouraged to connect and share challenges, accomplishments, stories, and experiences.

Is your school hosting a twinning fundraiser? Have a twinning story to share? Send the information and pictures to Elizabeth Jodice, Twinning Coordinator, at ejodice@cbconf.org.