Update on the Former Barrytown Novitiate 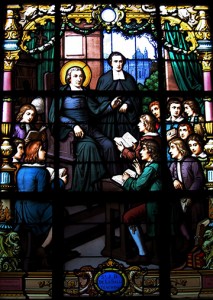 Many Brothers in the east coast fondly remember the Barrytown Novitiate, where the formation of many novices from the New York Districts (Legacy) took place for over three decades. Purchased by the Brothers at the turn of the 20th century, the property also housed the St. Joseph’s Normal Institute, where Brothers began their religious and academic life as teachers. The historic building was sold to the Unification Church in 1974. Today, the large chapel still showcases the eight original stained glass windows depicting significant events in the life of St. John Baptist de La Salle.

Recently, the Unification Theological Seminary (UTS), present owner of the former novitiate property, announced its plan to establish a program for higher education at the Barrytown campus in Dutchess County, New York. Starting in 2014, it will offer a Bachelor of Arts (B.A.) Degree Program in World Religions and Philosophy. In its first year, enrollment is expected to be approximately 60 students to reach 226 by the fifth year.