Vatican News highlighted the Solidarity and Development Secretariat’s COVID-19 campaign to support individuals in underdeveloped parts of the world. Vatican News published the story online. The Institute of the Brothers of the Christian Schools translated the text, which appears below. The original text is available here on Vatican News >

The Brothers of Christian Schools has schools and universities in over 80 countries, 60% of which are located in the third world. Initiatives are multiplying in anti-virus prevention, especially with people who have a lack of income and food. In the Philippines, the Lasallian university is giving shelter to the homeless and engaged in the distribution of assistance.

The great Lasallian family has over one million students, 90 thousand teachers, and four thousand Christian Brother schools in 80 countries on five continents. In the “first world,” lessons are continuing to carry on through distance learning. In the “third” world, they have regrettably been suspended but solidarity continues in arrangements for personal protections and with aid for food supplies, for those who now do not have any income due to the spread of the virus. 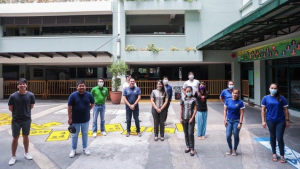 In the Philippines, La Salle University distributed sanitary kits for homeless people housed on the premises.

The Institute of the Brothers of the Christian Schools has come together with the De La Salle Foundation, Solidarity International ONLUS and has launched an awareness campaign through its #LaSalleCOVID-19. More information can be found on www.lasalle.org where there is a collection of funds to promote solidarity and closeness in order to help the most vulnerable respond to the COVID-19 emergency. The hashtag was designed to respond to the urgent questions being raised in developing countries. These questions include “how can you implement the measures of social distancing in slums?” and “How can you wash your hands frequently without running water?” and “How can the more fragile health systems face up to the medical needs of so many people?” The hashtag enables teachers and students of particular class to connect via social media and to help link students and teachers in other countries, sharing messages of hope with photos and video clips. Through social media, they can also exchange information about the many initiatives that Lasallians are carrying out locally to assist their own communities, such as distributing food and hygienic and sanitary products and creating mask and safe shelters.

Initiatives in the Philippines, India and Cambodia

The 16 Lasallian educational communities in the Philippines have come up with the initiative called “Kada-uno.” This provides six safe places for healthcare workers, seven for the homeless and one for Filipino workers from overseas who are in quarantine. They are involved in producing masks and supplying medical instruments and equipment in different hospitals nationally. Brother Amilcare Boccuccia, director of the De La Salle De La Salle Solidarietà Internazionale ONLUS, explained to Vatican News, India that they have organized the distribution of food supplies to the vulnerable people in Mangalagiri and Susasi Pathiyapuram. At La Salle Pouthum, a school in Cambodia, the Brothers and Sisters marked the feast of Founder, Saint John Baptist de La Salle on April 7 by providing food and basic necessity items to people infected with coronavirus and those in need in the local community.

We asked Brother Amilcare to clarify the situation in schools of the “first world” and those in the more vulnerable areas where Lasallian projects of solidarity are taking place.

“We are present in 80 countries where 60% are third world and 40% are in the “first world.” The problems we face in Italy are communication and the effort to carry out teaching via the internet and at a distance. In the third world, most of the countries do not have that possibility, either because the pupils do not have the equipment or because the internet connection is often not powerful enough to do lessons that way. As a result, almost all countries closed their schools entirely, although some are trying to reopen. Only yesterday, I received word from Madagascar that the government has issued an order to permit the reopening. However in places where suitable means of communication are lacking, the teaching has stopped.”

Do you give education in health and anti-virus prevention to pupils in the so-called “third world” and to their families?

“Yes, generally speaking. Before and after closing the schools, the Brothers and lay teachers were able to give instructions. As we see here in Italy and throughout Europe, it is not possible to remain shut in at home for the sake of the economy and for the survival of the individual. Consequently, contacts were continued although they were not as close as in normal times. This was a great help because the Brothers and teachers were involved not only in giving instructions but also in such things as distributing masks and hygienic and sanitary products.”

Tell us about one or two of these initiatives in solidarity and local aid which have struck you most. 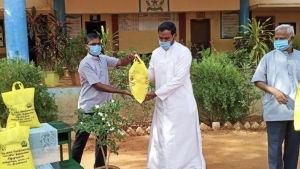 Distribution of aid by Lasallians in India

“About one month ago, we launched a survey asking representatives of the school establishments to tell us which solidarity projects they needed most. When the replies came in, we were greatly surprised to see that the first need was food. We were surprised because we expected it to be medicine. However, when I thought back to my own 40 years’ experience in Africa, I understood immediately.

“The economies in these countries change day to day. People were unable to find work because the small enterprises were shut down by the government and has left families without food and any cleaning materials. The first and most important action is to buy food and distribute it immediately to the poorest people. For example in Nairobi, where our international houses of formation are, they are dedicated to providing food to single mothers with children in the slums.

“In India, they have targeted those in need and have distributed food and sanitary equipment. We are working to send them money as a way of helping them. The example of the Philippines was a beautiful one. They were the first to mobilize themselves. La Salle University made areas available to the homeless, where the homeless became of great service.

“There was lack of volunteers so this resulted in the homeless preparing the kits and the masks. They said they were reborn psychologically, because in the past they had always been the ones asking for alms, and they found themselves in a position to help others. However, we received an emergency message from Burkina Faso this morning, and we have not yet responded. They had told us that the poverty is spreading rapidly and Islamic Extremism is intensifying its attacks. Lastly our schools are in the flood areas, which is magnifying the impact of this virus.”

The greatest concern, however, is what will happen if the virus strikes even harder in these very vulnerable countries. What do the Brothers and lay partners say to you about that?

“They are very aware that they do not have the technological, financial or sanitation means to confront the situation, the way the first world is. In almost all of Africa, there are no laboratories capable of carrying out a proper analysis of COVID-19. The wave has also just arrived there. They are hopeful in the fact they have a young population so there will be a great self-resistance, which we did not have in Italy. Their refrain is “hunger will kill us quicker than the virus.” In India, even if someone has a job, the firms have been shut down and there is no government intervention. They do not have any social legislation like ours. Consequently, even people who were well off and middle class are on the verge of starvation. Overall the biggest concern is the lack of food.”