Lasallian Women of Hope (LWH) hosted its first global virtual celebration on October 1, 2022, to raise awareness about and fundraise for the program, which aims to ensure girls and women have full access to Lasallian education. 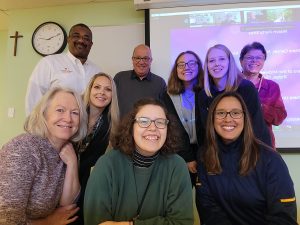 A group gathers at La Salle University in Philadelphia, Pennsylania, for a “Streams of Hope” watch party.

The event featured videos of LWH coordinators and young women speaking about the impact of LWH projects and how the support provides them with a sense of empowerment and dignity. Grace Wrakia, coordinator for the Lasallian Family in Papua New Guinea, and two students, Elma and Vanessa, were among the women who shared their stories during the livestream.

“I think this sanitary pad project is a wonderful initiative. Not only does it help a girl child stay in school, it builds a stronger relationship between the female teacher and the young woman,” Grace said after the event. “The relationship between the student and teacher is one important aspect of Lasallian education. There are many direct and indirect benefits to this project. It is a simple project but has the potential to expand to address more of these needs. In developing countries like PNG, young people become victims of abuse and neglect by those who should be imparting care and protection. This sanitary project we call ‘The Big Sister’ project is a beautiful initiative that should continue into the future.”

In addition to the stories, the event offered keynote presentations, discussions at watch parties or in breakout rooms and award presentations. Laura Ballerini, communications director for the Solidarity and Development Secretariat, and Heather Ruple-Gilson, co-secretary of Association for the Secretariat for Association and Mission, gave keynote addresses about the emerging needs of girls and women throughout the Lasallian world. 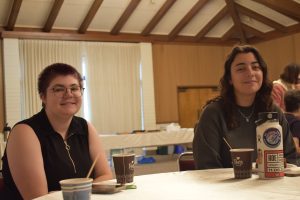 “To see all the compassion Lasallians had for women in their struggles to attain an education, as well as the practical focus Lasallian Women of Hope had toward alleviating those struggles, was incredibly heartwarming,” said Maggie Popielarz, a senior at La Salle University in Philadelphia who attended the watch party on campus. “Attending the Lasallian Women of Hope event and seeing the positive impact the organization has had on women and communities has caused me to have increased gratitude for the education I’m receiving here at La Salle University and has inspired me to further consider work that benefits the disadvantaged. I’m very happy to have attended this event and I hope to attend similar events in the future.”

The event included the presentation of three inaugural awards named after influential women in the life of Saint John Baptist de La Salle. Brother Oscar Okoth, FSC, and Jane Maina, from Mwangaza College in Nakuru, Kenya, where LWH started, received the Madame Nicole de La Salle Award, named for De La Salle’s mother, for their work in establishing Lasallian Women of Hope. FairTrade Caravans, a fundraising partner of LWH that sells fair trade items mostly made by women and children, received the Madame Maillefer Award, named for the woman who was responsible for the initial encounter between De La Salle and Adrien Nyel that eventually led to the founding of the Brothers of the Christian Schools. Lois Harr, who recently retired from Manhattan College, received the Sister Louise Hours Award for her accompaniment of others and steadfast support of LWH. While De La Salle was in Parmenie struggling to live out his vocation, Sister Louise encouraged De La Salle to return to the Brothers and continue the mission.

“Wow, wow, wow,” said Brother Oscar. “What a wonderful event it was, Lasallian Women of Hope. It was so touching. May God continue blessing you in all activities you do in touching the lives of women entrusted to our care.”

“We wish to kindly ask all those friends and partners to continue to help our girls,” said Jane. “Our aim is to introduce programs that would cater to the mental health of our girls, so they are all able to attend their classes uninterrupted while getting their sanitary pads.” 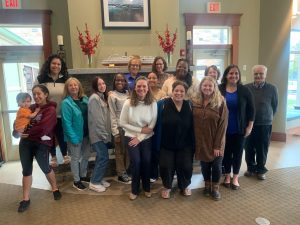 Brother Oscar, Jane and Maryann Donohue-Lynch (District of Eastern North America), co-founded LWH in 2016 with the Pad Project at Mwangaza College. From there, LWH expanded to additional locations to provide grassroots female empowerment while developing sustainable solutions to mitigate obstacles impeding educational access. Through its grants, LWH delivers creative, effective and durable solutions to educational inequities for girls and women. Now a project of the Institute of the Brothers of the Christian Schools’ Solidarity and Development Secretariat, LWH has projects established or developing in Kenya, Papua New Guinea, South Africa, the Democratic Republic of the Congo, Rwanda, Madagascar, India, Haiti and Burkina Faso. Learn more about LWH and donate >