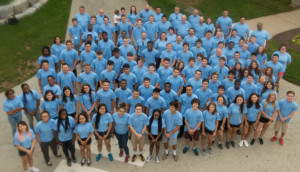 Young Lasallians from across the Lasallian Region of North America came together over the summer in District and ministry gatherings to spend time in service, community and reflection.

In the District of Eastern North America (DENA), more than 100 students and moderators gathered for the annual Lasallian Youth Assembly from July 16-21 at La Salle University in Philadelphia, Pennsylvania. The theme of the gathering was based on Pope Paul VI’s quote “If you want peace, work for justice.” The participants engaged in community service projects including park and neighborhood cleanup, summer program tutoring and urban poverty outreach while also reflecting on faith and community. 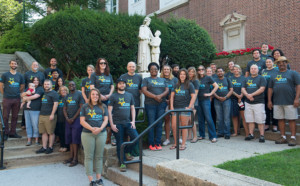 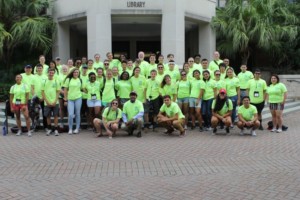 In the District of San Francisco New Orleans (SFNO), this year’s Lasallian Youth Assembly took place June 18-23 at Loyola University in New Orleans, Louisiana. Fifty students from 11 SFNO and México-Norte District schools, along with moderators, Lasallian Collegians and program facilitators gathered. Reflecting on the theme, “I was in prison and you visited me…Mercy Without Borders,” participants were given the opportunity to learn about some of the realities and challenges experienced by people within the criminal justice system in the United States. 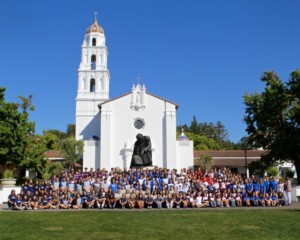 Also in SFNO, over 180 students from 15 high schools gathered with chaperones for a week of leadership building and Lasallian formation at the 14th annual Lasallian Student Leaders gathering, which was held July 16-21 at Saint Mary’s College of California in Moraga. Focusing on the theme of servant leadership, the week allowed student leaders to deepen their understanding of servant leadership through the lens of the Lasallian Core Principles.

Nineteen students and three chaperones from Totino-Grace High School in Fridley, Minnesota, part of the Midwest District, spent five days in July at Saint Mary’s University of Minnesota in Winona for a Lasallian Experience Mission Trip. The group served with Habitat for Humanity-Winona and Kinstone Permaculture Farm, participating in numerous community building activities and spending time praying with and learning from the Brothers at Saint Mary’s.