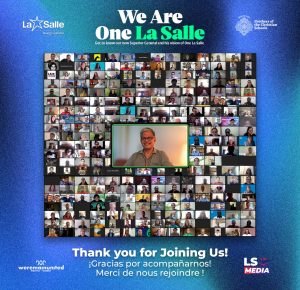 Brother Armin began by referencing The State of Religion and Young People: Navigating Uncertainty, a report by Springtide Research Institute that talks about what young people are thinking and feeling. He encouraged young people to connect with each other and see others as a brother or sister. He also took part in a question and answer session.

The second part of the event featured Laura Ballerini, communications director for the Solidary and Development Secretariat, who introduced a Lasallian fundraising initiative for water at San Isidro Labrador School in Pozo Colorado, Paraguay. This project is aligned with the United Nations’ Sustainable Development Goal 6, which promotes clean water and sanitation. More information on this education and fundraising campaign will be released in September.

Lara Jomalesa from the Philippines and Christian Camacho from the United States hosted the event. Camacho, who served as a Lasallian Volunteer in 2021-22, is in discernment with the Brothers and served in the Springtide Ambassadors Program from 2021-2022 and is a leadership fellow for the program in the 2022-2023 cohort.

Indivisa Manent: We Remain United! and La Salle Media presented the livestream. Indivisa Manent is an online global community with the primary goal of promoting a deeper sense of belonging to the international Lasallian network. La Salle Media is the media entity for Young Lasallians to share stories, resources and ideas and to promote networking and collaboration. The International Young Lasallians Prayer Group led prayer.