It is an expression that tells about our bond. It includes people we love, who come to see us, sometimes unexpectedly, to chat, to hear from us, and sometimes to challenge us with their vision of things and sharing of who they are.

This is exactly how we felt about Brother Robert Schieler, FSC, Superior General of the Brothers of the Christian Schools, and Brother Timothy Coldwell, FSC, General Councilor for RELAN, members of our spiritual family coming to Francophone Canada. We dressed up our hearts. All excited, we were looking forward to greeting them, and sharing views about the Lasallian mission. 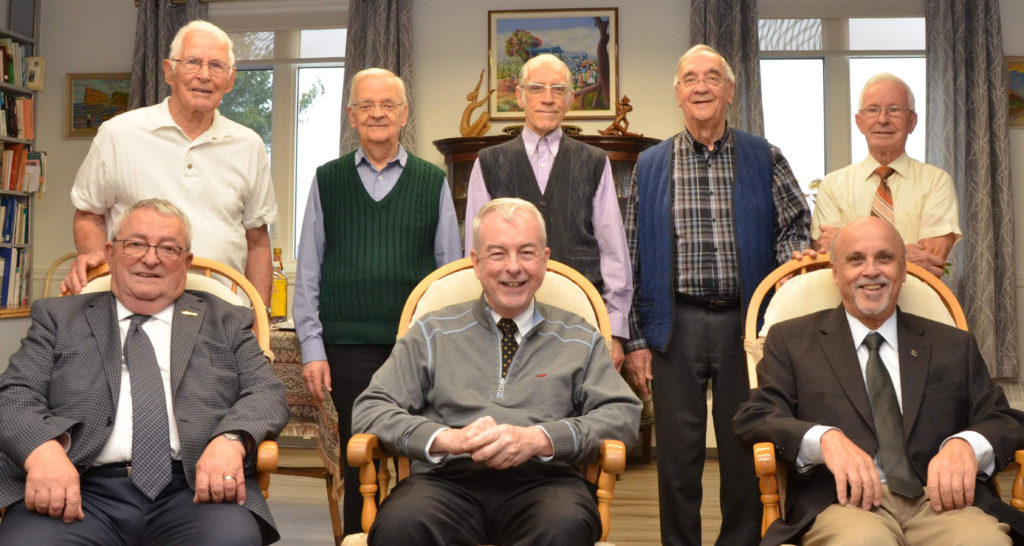 They arrived in Montréal on October 31, the afternoon of Halloween. And we will remember it for a long time, since the popular trick-or-treating was cancelled because of the heavy rains forecasted.

The pastoral visit began the next day in Saint-Augustin de Desmaures at the Villa des Jeunes, where the team was hosting a high school leadership workshop. Brother Bob had the opportunity to address these young people because many of them were at ease with English. The “parterre,” the main room for animation, freshly renovated, provided a personal space to visit. Brothers Bob and Tim had the opportunity to understand and experience the “wow” effect of the Villa and its biblical-looking meeting rooms. This visit was followed by a moment of relaxation and a fraternal dinner, prepared by the octogenarian but young-hearted community to welcome our distinguished guests.

In the afternoon, all Lasallians from the Québec City area met at the Cook Street community in Old Québec. High winds, power outages, and even overturned trucks on the Pierre-Laporte Bridge were also at the party. Warm and safe inside, the guests attended the public and solemn commitment of two Lasallian associates. Gilles Routhier, dean of the faculty of Theology at Laval University, and Robert Laurin, pastoral animator, spoke out as associates of the Brothers of the Christian Schools. While this was a very first engagement for Mr. Laurin, Father Routhier once again faithfully renewed his wishes since the very beginning of the Lasallian association movement in 2005. There are currently 22 formal Lasallian associates, and this number continues to grow.

The next day, our guests returned to Montréal for a meeting with the Regional Council of Young Lasallians. Brother Bob told them, “I am not worried about the future as long as you are making contributions as young people. Your presence is life-giving.” 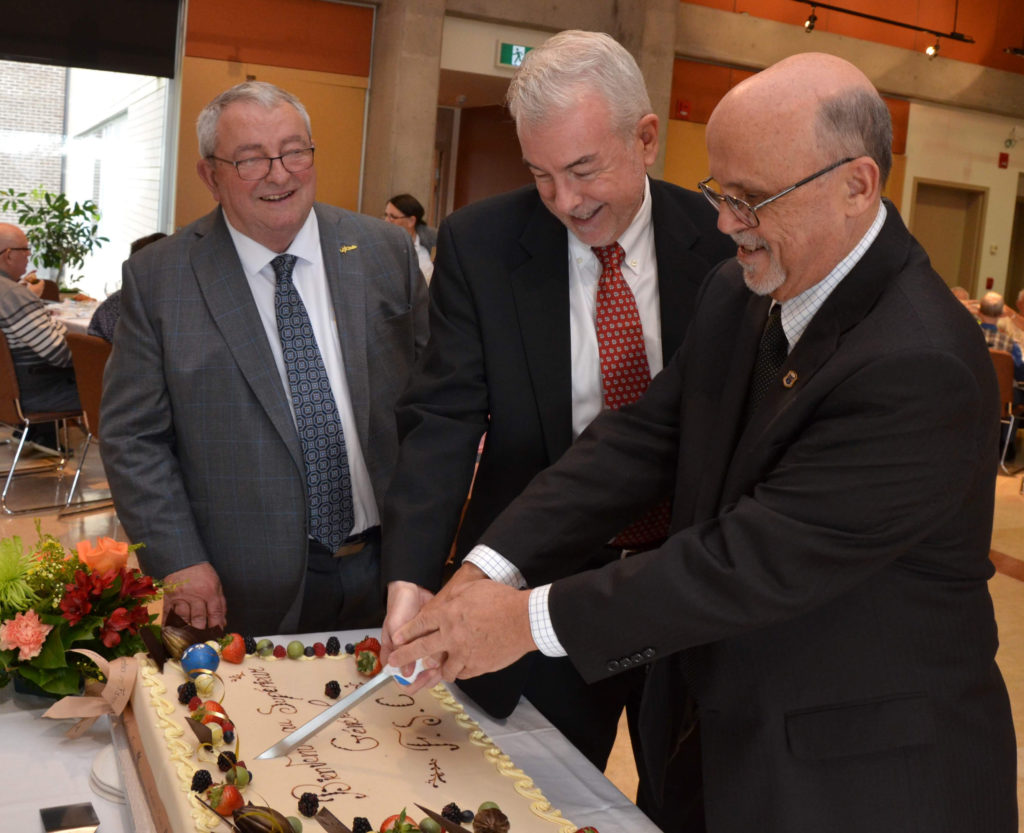 A Day of Lasallian Thanksgiving

Sunday, November 3 was a very special day. A Day of Lasallian Thanksgiving was held at the Residence De La Salle (the Brothers’ infirmary). Under the theme “A Harvest of Successes,” the day was intended to share the good work of each other under the watchful eye of our guests of honor. That day, which is now a tradition, gave us a concrete opportunity to work “together and by association.” On several occasions, the Superior General stressed the strength and vitality of the mission here. Moreover, he did not fail to emphasize his amazement of the elderly Brothers, who, through their dedication, have allowed the mission to be what it is today. These Brothers experienced a succession of major changes in society, the congregation and in the Church, but, despite all that, they remained faithful to their commitment made when they were all young men.

In his address to the Lasallians gathered, Brother Bob recalled that 300 years ago, the Brothers were the only protagonists of the mission. For 60 years though, Brothers and Lasallian Partners have worked together for the Lasallian mission, naming and defining shared mission. Today, he continued, they are writing a new chapter in the Lasallian adventure of education.

Brothers Bob and Tim completed this thanksgiving day by visiting the sick.

The next day, November 4, our visitors inaugurated the Pavillon du Bord-de-l’Eau, which was rebuilt following the 2018 floods. They took part in the District Council meeting where current affairs and future plans were discussed. 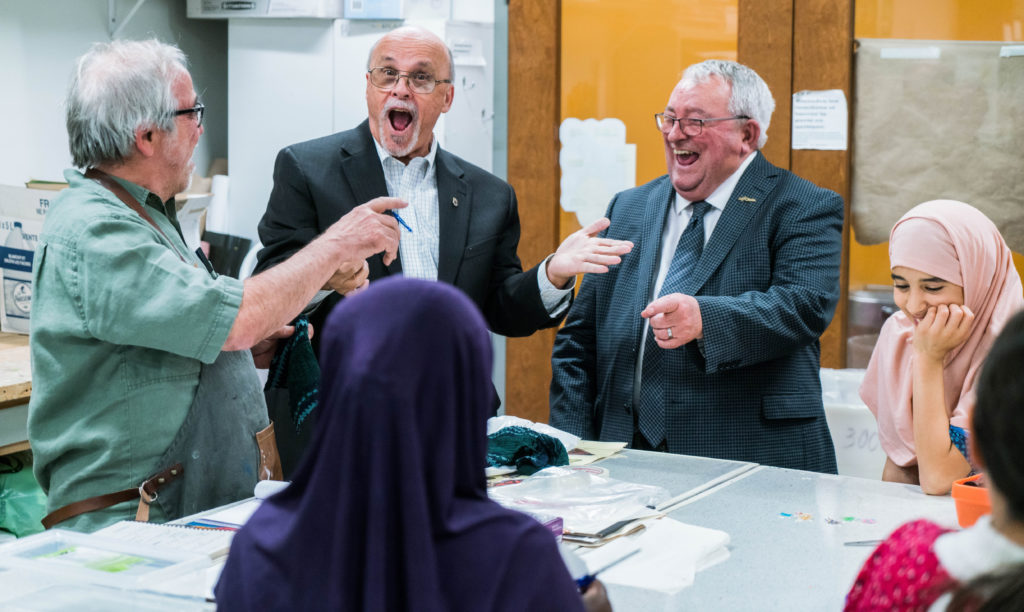 In the afternoon, our Brothers headed to the Saint-Michel district to see how the latest ministry of Francophone Canada, the Centre Lasallien Saint-Michel, had evolved. Five years ago, Brother Tim was able to see the site still under construction while the landscaping was still a project. They were able to see this time that the mission has greatly expanded and that the youth in the neighborhood had adopted it as an essential hub. Our visitors were impressed by the comings and goings of the children, happy to meet these new adult faces. It was a special opportunity for them to take stock of young people’s attachment to their environment. They gave us a demonstration of an activity called improvisation, a curious mix of hockey and theatre. The Brothers had the opportunity during dinner at the community to become aware of the essential and active role that the Brothers always play in the work.

For the last day of their journey, the Brothers rediscovered the Notre-Dame de La Rouge Centre, most of which has been redone. A chilly, autumnal setting met Brothers Bob and Tim at the site. By coincidence, Ottawa De La Salle Public School was present for a French immersion camp, and the young people were able to realize the link between their school and the Brothers of the Christian Schools. As one can imagine, these young people were more than happy to speak to Brother Bob in the language of Shakespeare. The dinner with the Centre’s animators looked like a family dinner. There is no longer a community of Brothers living on the Centre’s grounds.

Then, in the afternoon, we went back to the Pavillon du Bord-de-l’Eau for the MEL Council meeting. Our guests were struck by the composition of the Council: it is made up almost exclusively of Lasallian Partners and, among them, the directors of each one of the ministries in the District. Brother Bob looked at this in a positive way by recalling that the mission council aims to involve Partners in terms of voice and decision-making, and he sees that we are part of this dynamic.

Brother Bob took advantage of the fact that he was in the presence of the MEL Council to share with us his thoughts on the association, the Lasallian identity and the transformative dynamism of community. He mentioned the vitality of our District, which continues to meet the new needs of young people. He added, “What the Brothers put in place decades ago is now what you lead and guide. The Brothers take a vow of stability, well, when I look around the table, I see a lot of stability. I want to thank you for doing what you are doing here,  and for your presence at Regional gatherings. You have a lot to offer the Region, and everyone needs to be aware of what is happening here in your District.”

The next day, after six days on Québec grounds, Brothers Bob and Tim continued their journey to visit our southern neighbors.

This pastoral visit was a blessing for us because it allowed us to tell again our story and confirm ourselves in the direction of our mission here. As it happens often at international gatherings, we all felt that these fine visitors were, truly, members of our family.

Read more about the pastoral visit >