The next phase of the Chapter began today and so the signage was replaced. Down came “The Joy of Thanksgiving” and up went “Boldness in Truth.” The French, l’audace, and the Spanish, la audacia, lend themselves to audacity. Boldness and audacity carry powerful connotations into this phase, where we want to put our finger on what is life-giving. 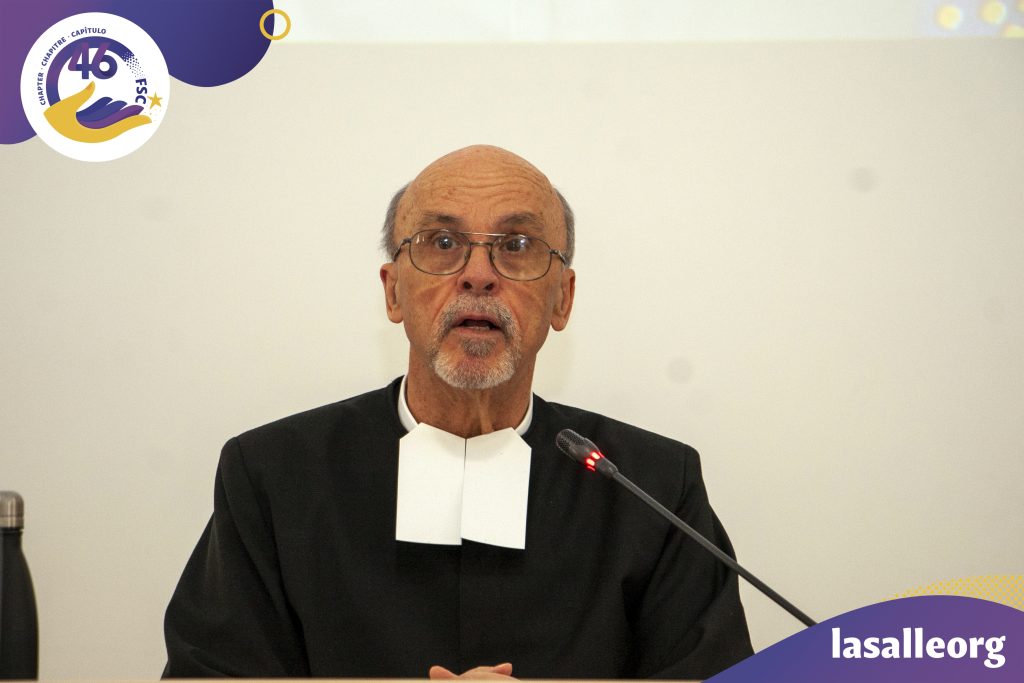 Brother Superior opened the day with an address that certainly was bold and direct. His words launched a day of robust exchanges in linguistic groups and in the plenary session. And of course over coffee and tea at the breaks. Knowing I cannot do justice to the whole of it, and certainly cannot convey the wisdom and warmth of the man who delivered it, I’ll remind you that it is available on the 46th General Chapter page on this website.

With John Baptist de La Salle serving as the axis, he placed the renewal Chapter of 1966-67, especially “A Declaration: The Brother of the Christian Schools in the World Today,” and today’s Institute on different points of this axis. He asked, “Have we been bold enough?” Do we have the boldness and creativity of John Baptist de La Salle? That question released no small amount of Socratic energy in the room.

What he was telling us is that the playground bullies in our Institute, ambiguity and complexity, the ones who threaten to suck the audacity out of us, are no match for our imagination and generativity. He encouraged us to be “finely attuned to the Spirit.” Finally, capturing the spirit and letter of our bold apostolic spirituality, he urged us to “listen to our hearts; that’s where Jesus is and he will lead the way.”

Brother Timothy Coldwell, FSC, is General Councilor for the Lasallian Region of North America. He is providing reflections throughout the 46th General Chapter, which are being shared on Lasallian.info and on Facebook and Twitter. Learn more about the General Chapter here and from the Institute of the Brothers of the Christian Schools. Search #FSC46GC on social media for more highlights. Visit the General Councilor’s page for more reflections from Brother Tim >

Side photo: Brother Robert delivers his address. Courtesy Institute of the Brothers of the Christian Schools Communications Service